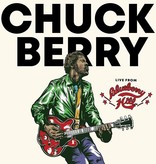 Chuck Berry, the songwriter and guitarist now known worldwide as the Father of Rock & Roll, came from humble begin­nings. After an evening in 1996 spent reminiscing about his storied career with his longtime friend Joe Edwards, owner of St. Louis restaurant and venue Blueberry Hill, Berry fulfilled the dream of music lovers everywhere; he started a live residency that spanned 209 shows at the 340-person capacity club.

The club became a modern-day Mecca for rock fans, and a once-in-a-lifetime opportunity to see the legend perform up close and personal. Live From Blue­berry Hill compiles some of Berry's greatest hits from this epic run of shows played alongside his fantastic band - including his son Charles Berry Jr. and daughter Ingrid Berry.